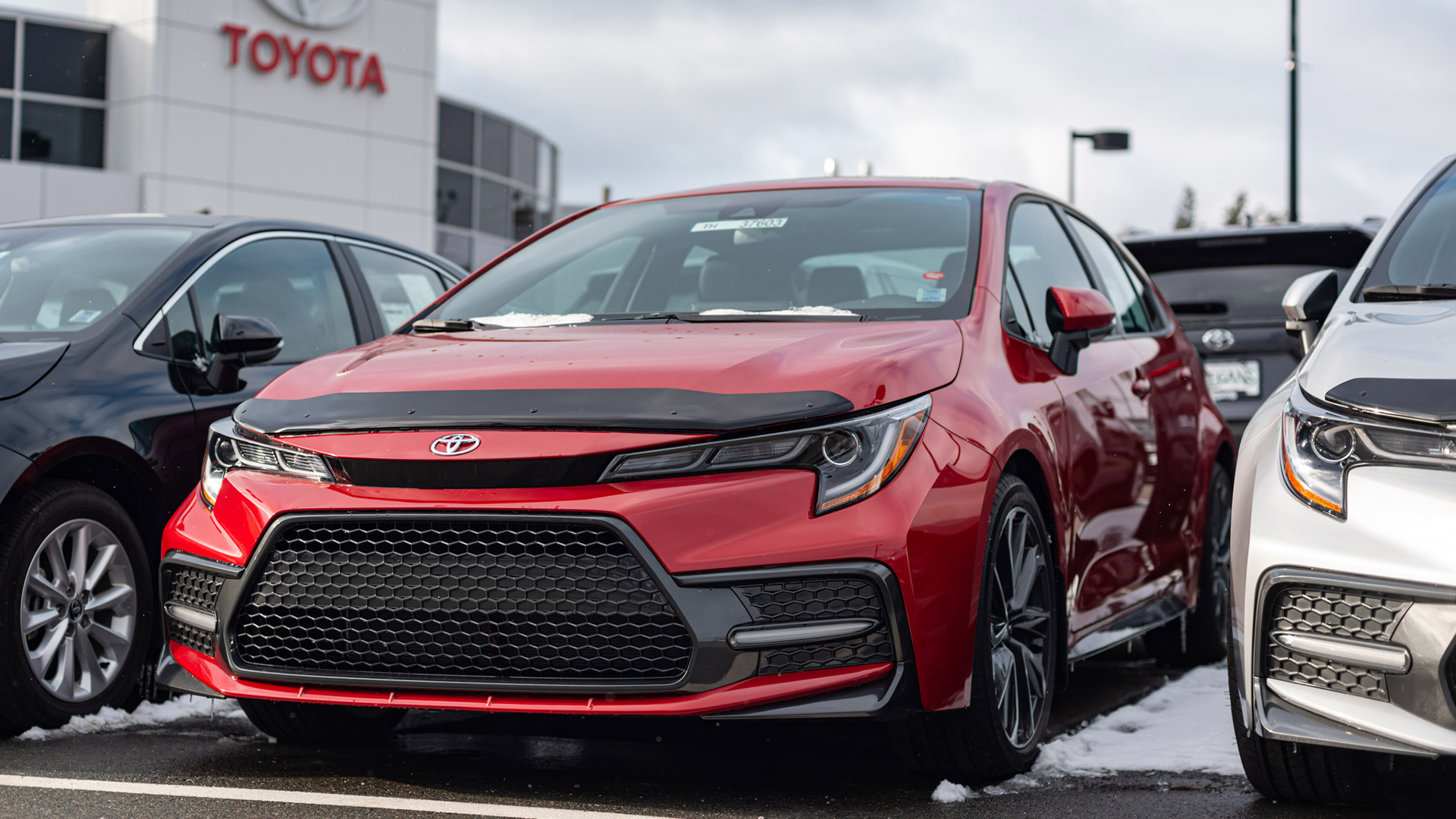 Toyota sells more cars worldwide than any other manufacturer. In 2018, they sold more vehicles globally than Nissan and Honda combined. But among their huge economic achievements, can Toyota check off dependability? Does Toyota build truly reliable vehicles?

At RepairSmith, we see more Toyotas than any other brand. From rugged pickups, family-friendly SUVs, and even small city cruisers, Toyota has a car to suit everyone’s needs. In the thousands of services we’ve performed on Toyotas, we can attest that they truly are one of the most dependable automotive brands on the market, but they aren’t without their faults. Here are some of the most common Toyota issues and average costs of repair.

Honda Accord vs. Toyota Camry: Which Car is Right For Me?

Toyota Highlander vs. Toyota 4Runner: Which Car is Right For Me?

Honda Pilot vs. Toyota Highlander: Which Car is Right For Me?

Toyota Corolla vs. Honda Civic: Which Car is Right For Me

The most commonly reported mechanical problem was with the 2005 – 2009 Toyota Avalon which saw a VVT-i oil line burst without warning, leading to rapid oil loss and causing major engine damage. In some cases, the damage was so severe that the entire engine needed to be replaced. The average cost to repair the sudden loss of oil was reported to be around $2,060. This is a classic example of how replacing a small part can save you thousands of dollars through preventative maintenance.

2003 – 2011 Toyota Camry owners were horrified to find their brand new cars burning through a quart of oil about every 1,200 miles. The problem with the 2AZ-FE engine became so widespread that Toyota offered free inspections, but affected vehicle owners were often told that the problem wasn’t bad enough to warrant a repair and sent away feeling frustrated.

There were two problems with the 2AZ-FE engine that were pinpointed to be causing excessive oil consumption. The first problem was defective piston rings. It can cost anywhere from $1,200 to $2,300 to replace these with most of the cost going to labor. The other problem was that some owners found that the thread on some head bolts were being stripped, which was causing blown head gaskets. Different head bolts were used to fix the problem, but with a replacement head gasket costing anywhere from $1,800 to $2800, it was an expensive way to discover the issue.

Toyota Corollas have a reputation for trouble-free motoring, but 2009 models were also plagued by the same oil consumption issues as the Camry. Unfortunately, it was a bad year for buyers of the Corolla as thousands of owners discovered a knock, grinding noise, or rattle coming from the engine at startup. This can be traced to the camshaft gear assembly and timing chain which started to wear prematurely.  Often, this would start at around 60,000 miles and would cost between $500 and $1,000.

For all its popularity, the Toyota Rav4 has had more than its fair share of mechanical issues. By far, the problem that affected the largest number of owners was a very harsh shifting transmission. Some owners were unaware this was a transmission problem, noting that their vehicles seemed to hesitate and accelerate at their own free will. This mostly affected vehicles built between 2000 and 2006, but owners of vehicles built as recently as 2019 were still reporting the problem. Reprogramming, or in some cases, replacing the transmission control module fixed the problem at a cost of around $900.

The Toyota Sienna has suffered from some pretty serious problems throughout its life cycle with the most persistent being vehicle speed that was inconsistent with driver input. Some owners reported that their Sienna suddenly lost power when decelerating, while others experienced their Sienna accelerating without warning. Unfortunately, this is a firmware and transmission issue which was unable to be repaired, or as some car dealers described it, ‘a characteristic of the vehicle’.

Another serious problem the Sienna suffered from was a leaky power steering system. Although it was recommended to replace the entire rack and pinion at a cost of approximately $1,300, the new parts would reportedly fail again, requiring another expensive replacement.

Toyotas don’t normally have many problems with their bodywork, and nor should they. Besides the occasional report of paint peeling off which is rare in itself, the cars are of a rather simple design with no unusual angles to allow water to pool. The 2002 to 2006 model 4Runners surprised everyone when the frames were reported to rust and deteriorate so bad that a lot of them were deemed ‘unroadworthy’ and had to be scrapped. Owners of these vehicles are recommended to get an annual rust inspection and rustproofing coating applied to their car as a preventative measure. The cost of this varies but is usually between $150 – $200.

Despite being around since 2017, the Toyota C-HR has been the subject of very few complaints. But, there were still some dissatisfied owners who experienced the windshield cracking frequently. Multiple owners complained that the windshield cracked just after they had hit the 3,000-mile mark, with one new owner having to replace their windshield five times! The exact cause has never been found, although there is speculation that the windshield glass had manufacturing errors that were never picked up on. The cost of a replacement windshield in a Toyota C-HR is approximately $420.

Two specific years in the Toyota Highlanders lifecycle stood out for very different reasons. The 2015 model suffered from a poorly assembled interior, but the 2008 model was well known for having engine knock. The fault was a rubber hose to the oil cooler that would split and drain the engine of oil. Often, the owners were unaware their vehicles were losing oil until a serious problem developed. While replacing an oil cooler hose is only around $300, some unlucky owners Highlanders had such severe damage from running with no oil that the entire engine needed to be replaced.

2006 – 2011 is widely regarded as ‘the problem years’ for Toyota’s best selling Hybrid. The most complaints came from owners who were experiencing problems with the lights switching off without warning. A faulty ignition module was found to be the culprit, causing bulbs to burn out at an abnormal rate. Owners would often replace the headlight bulbs, only to have the problem reoccur, not realizing the ignition module needed to be replaced. Depending on exactly how much of your lighting system needs to be replaced or upgraded, the cost of repair could be anywhere from $440 to $1,800.

When it comes to reliability, the Toyota Tacoma has one of the best reputations in the business. It’s not uncommon to see them hit 500,000 miles without any major issues. It was a big surprise when, in 2016, the latest models started showing early signs of transmission failure. This was another instance of the transmission control module needed to be reflashed.

But this was nothing compared to the 2012 model when owners reported the check engine light and traction control lights being displayed and their vehicle going into limp home mode. The issue was related to the air injection system, which was typically fixed by replacing the secondary air injection pump at a cost of around $900. Some mechanics insist the valves are also replaced which could almost double the repair bill.

The Toyota Tundra is another vehicle with a rock-solid reputation for reliability, but one problem that has been somewhat consistent since release is a constant check engine light. This relates to a malfunctioning air vacuum control solenoid circuit that was causing the Powertrain Control Module to shut off the air injection system. If the Tundra was out of warranty, owners would be stuck with a repair bill of around $1,600.

It’s worth noting that the Toyota Yaris is the Toyota with the fewest consumer complaints by far. However, 2007 models were plagued by a problem with the clearcoat wearing prematurely in spots. This then caused the paint to show signs of wear and some relatively new Yaris models even started showing early signs of rust.

The underpowered FT-86 wasn’t a big seller for Toyota, and the few problems they had were ironed out early. The worst problem seemed to be a rough idle in the engine that would cause the car to occasionally stall. Toyota claimed that the adaptive software in the ECU was the cause of the problem, noting that if the car was driven outside of ‘normal operating conditions’, the software would log an error code. In most cases, simply flashing the ECU solved the problem, which Toyota was charging around $300 for.

*All repair prices are average repair costs based on estimates

#Toyota
Share this story:
RepairSmith RepairSmith is the easiest way to get your car repaired. For the first time, car owners can choose to get their car repaired in their driveway or at one of our certified shops.