What Does a Catalytic Converter Do? (+5 FAQs) 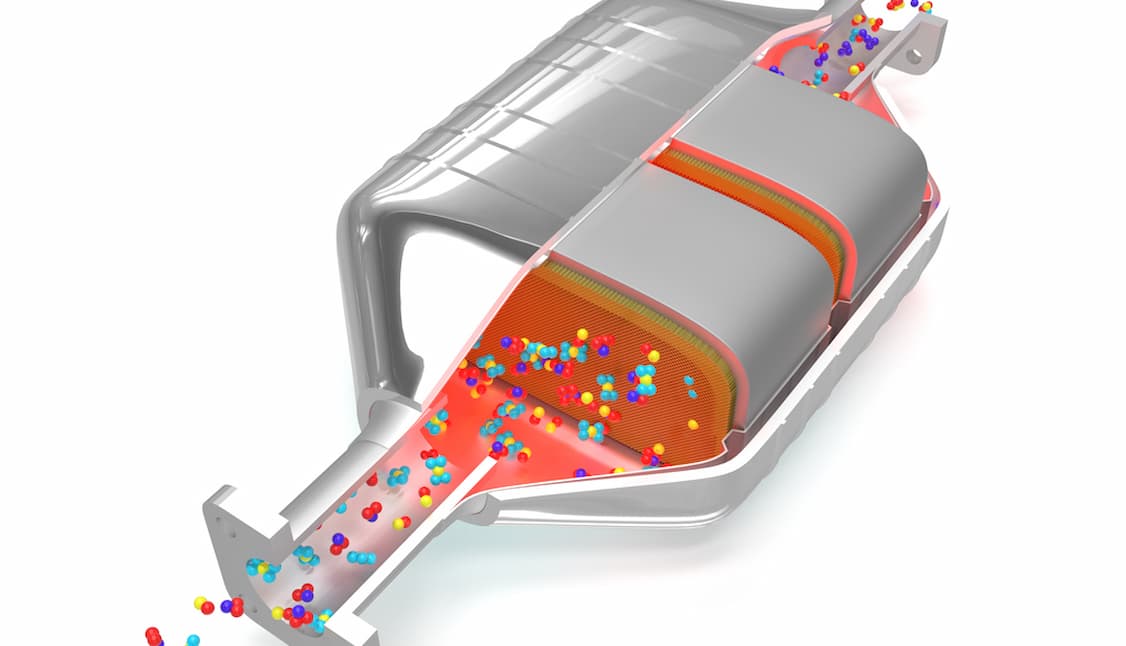 What does a catalytic converter do?
Does your car have one?
Does your exhaust gas really contain harmful emissions?

Well, we have the answers to these questions.

What Does a Catalytic Converter Do?

Your catalytic converter creates a continuous chemical reaction to reduce the harmful emissions from your car. It takes the toxic gasses nitrogen oxide, hydrocarbon, and carbon monoxide — and converts them to less harmful exhaust gas with a reduced environmental impact.

It’s housed in the middle of your exhaust system, actively converting these harmful gases into cleaner, single-gas emissions.

Your state likely has compliance laws around your vehicle emission levels, which you may violate if you have a bad catalytic converter — not to mention that your average fuel efficiency will go down, leading to reduced fuel economy.

Okay, but how exactly does a catalytic converter work?
Let’s discuss this.

How Does a Catalytic Converter Work?

Catalytic converters use platinum group metals such as rhodium, platinum, and palladium to act as a catalyst for their chemical reaction. The precious metal content of a catalytic converter is arranged in a honeycomb structure. After the exhaust gasses pass through the structure, your vehicle’s emission will be expelled through the exhaust system as cleaner, safer gases with less harmful compounds.

Once converted, there are three primary emissions from the tail end.
These exhaust gasses are:

Because the combustion process is never perfect, smaller amounts of more harmful pollutants are also produced in an internal combustion engine and released as toxic fumes.

It’s also imperative to note that you need to use unleaded fuel for your catalytic converter to work. Lead in conventional fuel ‘poisons’ the catalyst metals, preventing them from doing their job.

Now that we know how a catalytic converter works, let’s find out why they’re required.

The Importance of Catalytic Converters

In 1963, the Clean Air Act was passed in the United States to help reduce the number of harmful compounds contributing to air pollution.

The National Emissions Standards Act, an amendment made in 1965 to the Clean Air Act, set the first federal vehicle emission standards. Each state has regulations that adhere to federal standards, with many states requiring that all registered cars be tested to evaluate the output of emissions from their exhaust pipe.

Here are the answers to some of your burning questions:

1. Does My Car Have a Catalytic Converter?

Yes.
And how do we know?

Since 1975, all fuel-burning vehicles have been required to have catalytic converters, which means your vehicle likely has one.

2. Can My Car Run Without a Catalytic Converter?

3. What are the Signs of Catalytic Converter Failure?

If you’re smelling sulfur or a “rotten egg” smell, it could mean that your catalytic converter is malfunctioning. The smell comes from the toxic emissions circling back into your vehicle instead of out of your exhaust system.

A clogged catalytic converter can reduce the amount of airflow through your engine, causing your engine to burn more fuel than usual and resulting in a noticeable drop in fuel efficiency.

A clogged catalytic converter can prevent exhaust gases from effectively escaping your exhaust system. This can result in increased exhaust pressure and causes your car to stall when trying to start the engine.

4. Why are Catalytic Converters Stolen?

A typical catalytic converter has 3-7g of platinum, 2-7g of palladium, and 1-2g of rhodium.

5. Why is Catalytic Converter Replacement and Repair so Expensive?

You can expect to pay between $300 to $2,500 to repair a catalytic converter because of the precious metals it contains. Since the materials are expensive, you can expect a higher repair cost.

Deep cleaning is also another repair option. However, when there is excessive wear, catalytic converter replacement may be the only option.

However expensive, when a catalytic converter replacement or repair is required, it’s a necessity for your car.

RepairSmith is a convenient mobile vehicle auto repair and maintenance solution. We offer convenient online booking and competitive prices for all auto repairs.

All our repairs come with a 12-month | 12,000-mile warranty. Contact us today, and we’ll bring the repairs to you.

#catalytic converter
Share this story:
RepairSmith RepairSmith is the easiest way to repair your car. Our certified technicians deliver quality car repair and maintenance directly to your driveway. We offer upfront pricing, online booking, and a 12-month, 12,000-mile warranty.