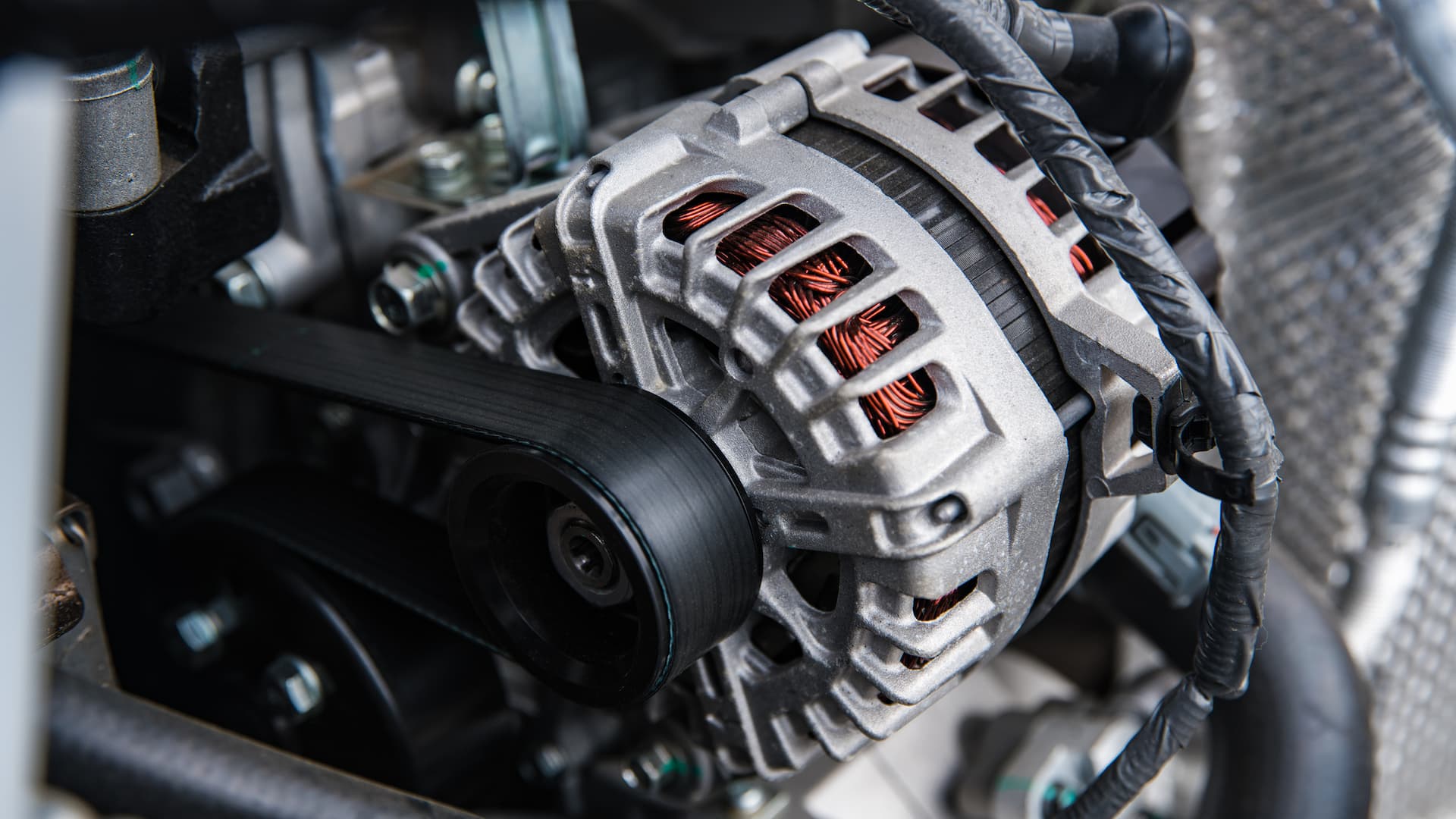 Identifying the signs of a bad alternator early on can save you a lot of time and money.

But what are the signs of a failing alternator?

And what should you do if you’re experiencing alternator trouble?

In this article, we’ll answer those questions and tackle a few frequently asked questions to give you a better understanding of your car’s alternator.

6 Signs Of A Bad Alternator

There are several indications of  a failing alternator.

Here are some of the most common ones:

1. The Alternator Warning Light Turns On

A dash light is likely the most common sign of an issue with your charging system.

Most cars built within the last decade should include a dedicated alternator warning dash light to signal an alternator issue. Some cars use their battery light or check engine light, but others may show “ALT” or “GEN,” implying the alternator or generator.

This battery warning light connects to the computer systems within your vehicle to monitor the alternator’s voltage output. If the alternator output rises or dips above or below a set limit, you’ll start experiencing problems with your electrical system, and the light will turn on.

A healthy alternator should have a voltage output of between 13V and 14.5V. As you use certain electrical components, like the headlight, windshield wipers, and the radio, your alternator needs to work harder to maintain the necessary voltage.

You might notice flickering headlights, or the interior lights are dimming or becoming unusually bright. Your speedometer, tachometer, dashboard lights, or radio might also stop working suddenly.

These are tell-tale signs of an issue with your vehicle’s electrical system.

Which of your car’s electrical accessories start acting up is usually dependent upon several factors, such as how well your alternator is still performing and how your car is programmed.

Many new vehicles have a preprogrammed set of priorities for where the alternator sends electricity. Safety is usually the primary factor, so when experiencing electrical failures, your car’s radio will likely go before its headlight.

Cars make tons of noises, some of which are completely normal while others can indicate serious problems.

One sound common to a bad alternator is a growling or whining noise.

If the alternator pulley isn’t properly aligned with the drive belt, or the alternator bearings are wearing out, it generally creates a growling or whining noise, indicating you may have an alternator problem.

Be careful to avoid leaving a bad alternator on for so long that it causes damage to your engine. If this happens, you’ll probably start hearing rattling from inside your engine caused by failed engine bearings. One

If you start noticing a strange smell, it could be that your alternator is working too hard or overheating, causing problems with the electrical system.

Because the alternator’s belt is under constant tension — and because it’s close to the engine — it may start wearing out over time and produce an unpleasant burning rubber smell.

If you’re noticing something that smells a lot like an electrical fire, it could be the alternator’s wires, and you could be facing alternator failure soon.

Unlike an electrical problem, bad belts are a little less common; however, they too could point to an alternator issue.

A bad alternator can often be caused by loose or missing belts. Since it’s easy enough to see a broken belt, it’s worth taking a look under the hood, even if you aren’t planning on fixing it yourself.

You can perform a quick check of the belt, looking for cracks, excessive wear, and other signs of age. But bear in mind that the belt must have the correct amount of tension; too much or too little could cause an alternator malfunction.

As a result, it may be best to avoid causing any additional damage to your car’s electrical system and let a mechanic handle it.

Aside from an alternator problem, many other issues can also cause frequent stalling and difficulties in starting your car.

Things like a bad battery or a faulty fuel pump can result in similar symptoms, so be sure to check everything else going on with your vehicle to find the root of the problem.

If the alternator is causing the issue, one potential reason is that it’s not charging your battery properly, resulting in a dead battery. If your car battery lacks charge, it won’t have sufficient power to turn your car on.

If your car is stalling even after you’ve turned it on, the spark plug system may not be receiving enough electricity from the alternator to keep the engine running.

Now that we’ve covered the warning signs to look out for, let’s go over some FAQs about your vehicle’s alternator.

Here are eight common questions and answers relating to alternators:

1. What Is An Alternator?

Three components make up a car’s charging system: the car battery, the voltage regulator, and the alternator.

Around the size of a coconut, alternators tend to be found near the front of the engine. They receive power from the crank shaft, which converts the pistons’ up and down movement into circular movement.

The vehicle’s alternator powers the electrical components of your car, such as the headlight and windscreen wipers.

The alternator gets its name because it uses an alternating current (AC) to generate electricity. Alternators produce AC power through a stator and rotor.

2. How Long Do Alternators Last?

While the alternator should ideally last as long as your vehicle, that’s not always the case. It’s hard to say exactly how long an alternator will last since so many factors affect its longevity.

Some cars may experience a faulty alternator after 40,000 miles, whereas others will go 100,000 miles without running into issues.

Remember, the alternator only had to power a few things in older cars, like the interior and exterior lights, the radio, and one or two other electrical components.

Modern cars, however, have many more electrical accessories like GPS units, heated seats, each power window, and more. All of these things need to be powered by your alternator, increasing its load.

3. How Do I Know If It’s A Faulty Alternator Or Battery?

In its simplest form, starting and running an engine involves three steps: the battery first delivers a jolt of energy to the starter motor, powering up the car.

In turn, the engine powers the vehicle’s alternator, which recharges the battery.

If you’re unsure whether you just have a bad battery or your car alternator needs replacing, jump-start your car. If the engine starts but then dies immediately after, you have an electrical problem, indicating the alternator probably isn’t charging the battery.

If your car starts and stays running, but you can’t start it again using its own power, it’s more likely that you have a bad battery.

A voltmeter measures the electrical difference between two points on a circuit. If you suspect a bad alternator, a voltmeter can be the easiest way to determine this.

4. Can I Run My Car With A Bad Alternator?

If you have a bad alternator or you’re just starting to experience car alternator problems, you can still drive it; however, it’s best not to.

If your alternator has stopped working entirely, you have minimal time before your car stalls and won’t restart since you have a dead battery.

5. Can My Alternator Fail While I’m Driving?

Yes, you can experience alternator failure at any time, even while driving.

Fortunately, if your car alternator fails while driving, it’s not as dangerous as losing your brakes.

If your car’s alternator completely fails while driving, your battery will provide all the electrical power the car needs. The battery is capable of supplying the necessary power, but only for a limited time.

How long the battery lasts depends on its size and health and how many electrical accessories you’re using.

What should you do, in this case?

If you’re driving and suspect your alternator has stopped generating power, turn off all the electrical accessories you can and find a safe place to park.

If you have a newer car with electrical power steering, a failed alternator while driving can present some challenges as you’ll lose all power steering.

In such cases, don’t drive the car at all.

Doing so can cause the engine to overheat, which can cause severe damage. The average cost of rebuilding an engine sits around $2,500 – $4,500, so it’s best to avoid taking such a risk.

Note: If you suffer alternator failure resulting from a snapped serpentine belt, it can cause issues with other components, like the water pump.

6. What Causes An Alternator To Go Bad?

Most of the time, alternators fail as a result of age or use.

However, some other factors can cause an alternator to fail prematurely.

Fluid leaking on the car alternator can commonly lead to failure. Often, engine oil or power steering fluid can work its way into the alternator and cause it to malfunction or fail.

Your driving habits will also affect the alternator’s lifespan. For example, if you spend a lot of time idling while using many of your car’s accessories, it can put the alternator under increased stress leading to more wear and tear.

Finally, if the alternator is located near the bottom of the engine, there’s a chance it may be subject to water and salt intrusion. Both of these can get in and cause an alternator malfunction.

7. How Much Does An Alternator Cost To Replace?

An alternator replacement can be an expensive process.

Prices will vary depending on the year, make, and model of your vehicle.

Prices can range between $420 and $850 and can even exceed that if you’re buying an original part directly from a dealer.

However, it’s often possible to rebuild the alternator for less than buying an entirely new part.

Rebuilding the alternator will generally cost about $70 – $120 for removal and installation plus an additional $80 – $120 for the rebuilder’s charge.

8. What Should I Do When Experiencing Alternator Trouble?

If you’re noticing troubles with your car’s alternator, your best bet would be to arrange for a mechanic to come over and take a look ASAP.

We recommend having a professional mechanic come to your driveway since driving with a faulty alternator can lead to additional, more expensive problems.

However, ensure that your mechanic:

Sure, finding such a mechanic can be easier said than done.

Fill out this online form for an accurate cost estimate for an alternator replacement and repairs.

While your car’s alternator should last the lifetime of your car, there are times when they fail prematurely.

Whenever you notice problems with your vehicle’s electrical system, don’t ignore it as it can indicate a potential alternator issue.

Once you do, ASE-certified technicians will come to your driveway, ready to set you up with a healthy alternator in no time!