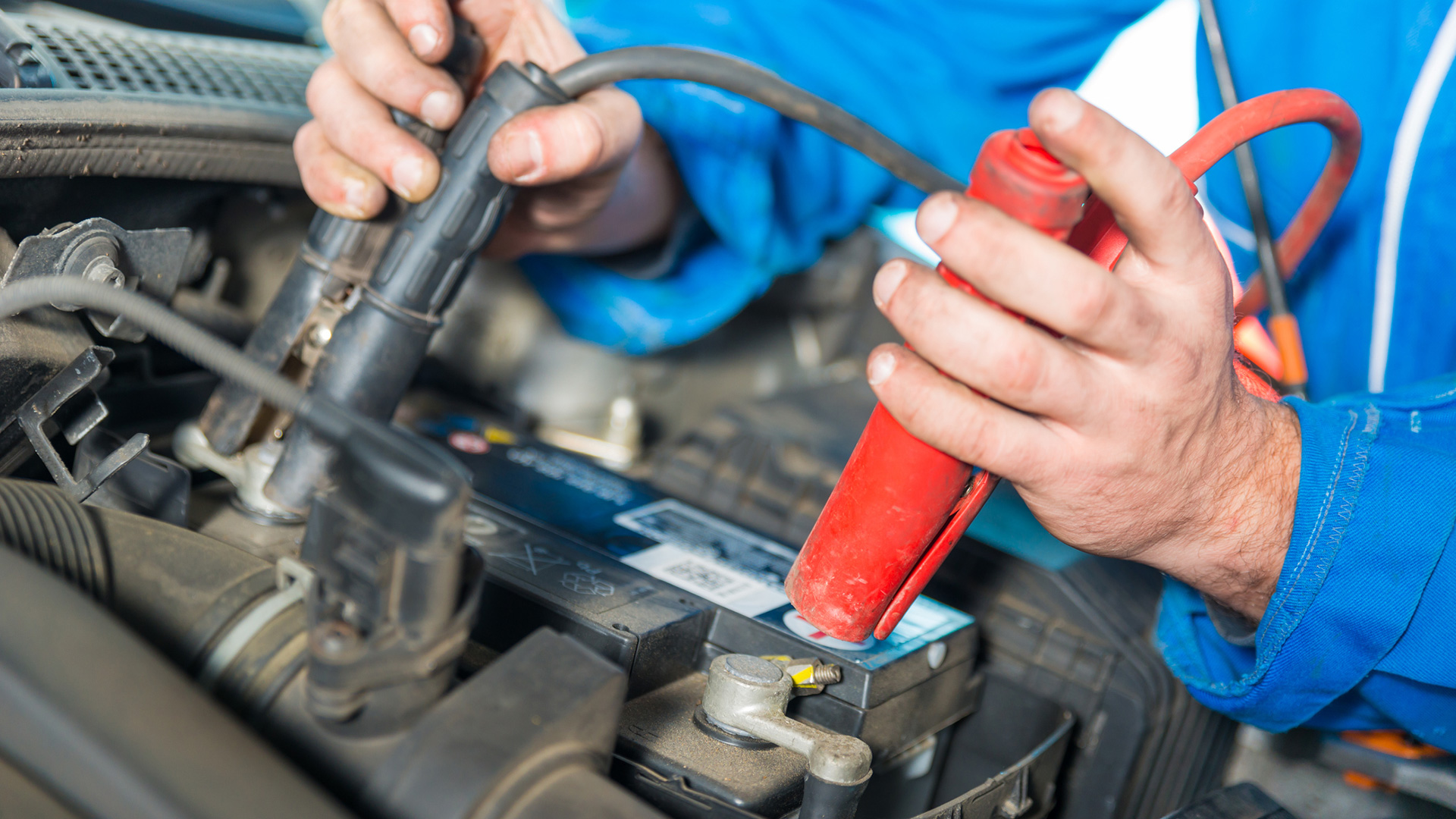 Unexpected battery problems are a surprise that no one looks forward to.

Understanding why your car battery keeps dying and how to prevent a battery drain is crucial for staying ahead of battery issues. You’ll want to notice them before they catch you off guard or lead to costly engine repair and roadside assistance calls.

What Drains A Car Battery?

There are countless reasons for waking up to a drained battery.
Here are a few common car battery drain culprits:

1. Defective Alternator (Most Common Cause)

Do you often forget to turn off your headlights?
No wonder your car battery keeps dying!

Headlights draw a lot of battery power (which is manageable when the charging system keeps replenishing the battery charge).

Numerous components in your car draw battery power without you noticing.

From dashboard lights to car door sensors, if something is left on overnight or isn’t turning off automatically, it can cause severe battery drainage.

Sulfated battery plates won’t carry an electrical charge very well, and you’ll be left with a weak battery. This is often why an old car battery won’t hold a charge when it reaches the end of its life span.

Note: Old batteries are common in pre owned vehicles. It’s always a good idea to get a new battery when you buy one.

Bad battery cables that have corroded will struggle to carry a charge.

Similarly, when there’s a poor battery connection between the cables and a battery terminal (battery posts), the circuit between your battery and electrical components will be “open” and disconnected.

Poor battery connections can also occur if you have recently modified your car or replaced your car battery.

The starter motor uses a massive jolt of energy from your battery to crank the engine. You need to drive for the alternator to recharge the drained battery.

However, if you only take a short drive, your vehicles battery won’t fully recharge and drain soon after. Try to drive at least 15 minutes, and limit your short trips to maintain a charged battery.

New electrical modifications (such as audio systems) could draw more power from your car’s battery than it can provide. When energy demand is higher than the supply, a weak battery will drain completely.

Recharging your battery is a temporary solution — a fully charged battery won’t last long if the energy demand stays high. So make sure your battery is rated for your modifications.

Extreme temperatures (hot or cold weather) can alter the chemical reactions in a car battery, affecting its ability to produce a charge.

Some newer batteries with a cold cranking amp measurement of over 750 amps are built to handle extreme weather and have longer battery life. While these batteries are effective, you may still end up with a bad battery.

Tip: It’s best to buy a battery with a warranty.

Now that you know why a car battery keeps dying, let’s go over some common symptoms.

Symptoms Of A Dying Battery

If the source of your battery problems is the battery itself, you’ll likely notice some of the following symptoms:

You’ll feel the engine struggling to turn over as shaking or strong vibrations inside the car.
You may also hear a whining or clicking sound from the car’s starter motor.

Headlights draw significant power from the battery. A dim headlight is a sign of insufficient power from your car battery to go around.

3. Problems With The Electrical System

Like a headlight, other electrical components may not function correctly (such as dashboard lights, a dome light, radio presets, or the interior light). These are telltale signs that your car battery is struggling to keep up with your car’s electrical system energy demand.

An electrical problem can be as simple as poor battery connections or a dome light that doesn’t turn off — draining your battery overnight.

A swollen battery case means the chemical buildup of a battery is compromised. This sacrifices its ability to produce and emit charge and is now unstable.

When that happens, battery failure is on the way and you must replace the bad battery.

Some new vehicle batteries have an “upper and lower” marker on the side of the case that indicates its charge capacity. If the marker is low, the battery is low on charge.

A failing car battery may cause intermittent sparks, leading to fuel building up in the engine cylinders. When ignited, this fuel expels an increased force, causing an exhaust backfire.

Keep in mind that a backfire could also indicate other engine issues. A proper diagnosis is required to rule out any engine repair.

That said, symptoms of a dying battery can be misleading, so let’s cover the basics of diagnosing a car battery.

Diagnosing a battery problem or a faulty charging system is a simple process but can be dangerous if not executed correctly.  If you have no experience with car batteries or auto repair, it’s best to get a qualified mechanic for the inspection.

Here’s what a mechanic would generally do:

Use a multimeter to measure the car battery’s current voltage. If there’s no voltage drop, there may be a problem with the battery cable.

2. Check The Fuses For Parasitic Drain

If there’s a significant voltage drop on the multimeter when a fuse is removed, the associated electrical component is the cause of the dead battery. Often times the problem can be a simple interior light fuse that’s faulty!

If the battery and fuses are working fine, a faulty alternator is most likely the culprit.

Use a multimeter to test the alternator’s charge — if there’s no charge, you have a bad alternator.

For reference, here a some cost estimates for repairs:

With the basics of diagnosing a dead car battery under your belt, let’s answer some common car battery FAQs.

Here are answers to some common questions about car batteries:

1. How Do I Prevent A Battery Drain?

Avoid human errors like leaving headlights on overnight or not switching off all electrical components after use to prevent battery drainage.

Tip: Use a trickle charger if you plan on leaving a battery disconnected for long periods. A trickle charger recharges a battery at the same rate it naturally loses power. This means your battery will stay healthy for months when unattended.

2. Can I Repair A Car Battery At Home?

Attempting to repair a dead car battery or damaged battery terminal at home can expose you to dangerous chemicals — leading to severe burns and injury. It’s best to get a new battery if you notice failing battery symptoms.

However, battery corrosion is the exception for home repair. Corrosion can be fixed with a light scrub with a steel brush. Remember to disconnect the battery first, when tackling corrosion.

Tip: If the battery isn’t damaged, only dead, try using a battery charger to revive it.

3. Does Jump Starting Another Car Drain A Battery?

This power drain is usually recharged through the alternator during driving. However, the battery may require an additional charge to recover fully.

4. What’s The Difference Between A Standard And Premium Car Battery?

The two common types of car batteries are:

The differences are in the needs of the car. Premium batteries tend to hold more charge and have longer battery life. While premium batteries are common in new vehicle models, the traditional lead acid battery is still used in most cars on the road today.

5. How Much Does A New Car Battery Cost?

A dead battery is a sure way to cloud your day, especially when car troubles appear out of nowhere.

If your car battery keeps dying and needs a battery replacement, contact RepairSmith!

RepairSmith’s qualified mechanics can perform any auto repair or replacement right in your driveway. Our repairs come with a 12-month, 12,000-mile warranty, and you can easily book appointments online, 7 days a week.

For an accurate estimate of how much your car battery service or replacement will cost, just fill out this online form.

#Battery
Share this story:
RepairSmith RepairSmith makes it easy to keep your vehicle reliable by delivering quality auto repair and maintenance directly to your driveway, with effortless booking, transparent pricing, and trusted technicians.