Alternator Replacement – Everything You Should Know 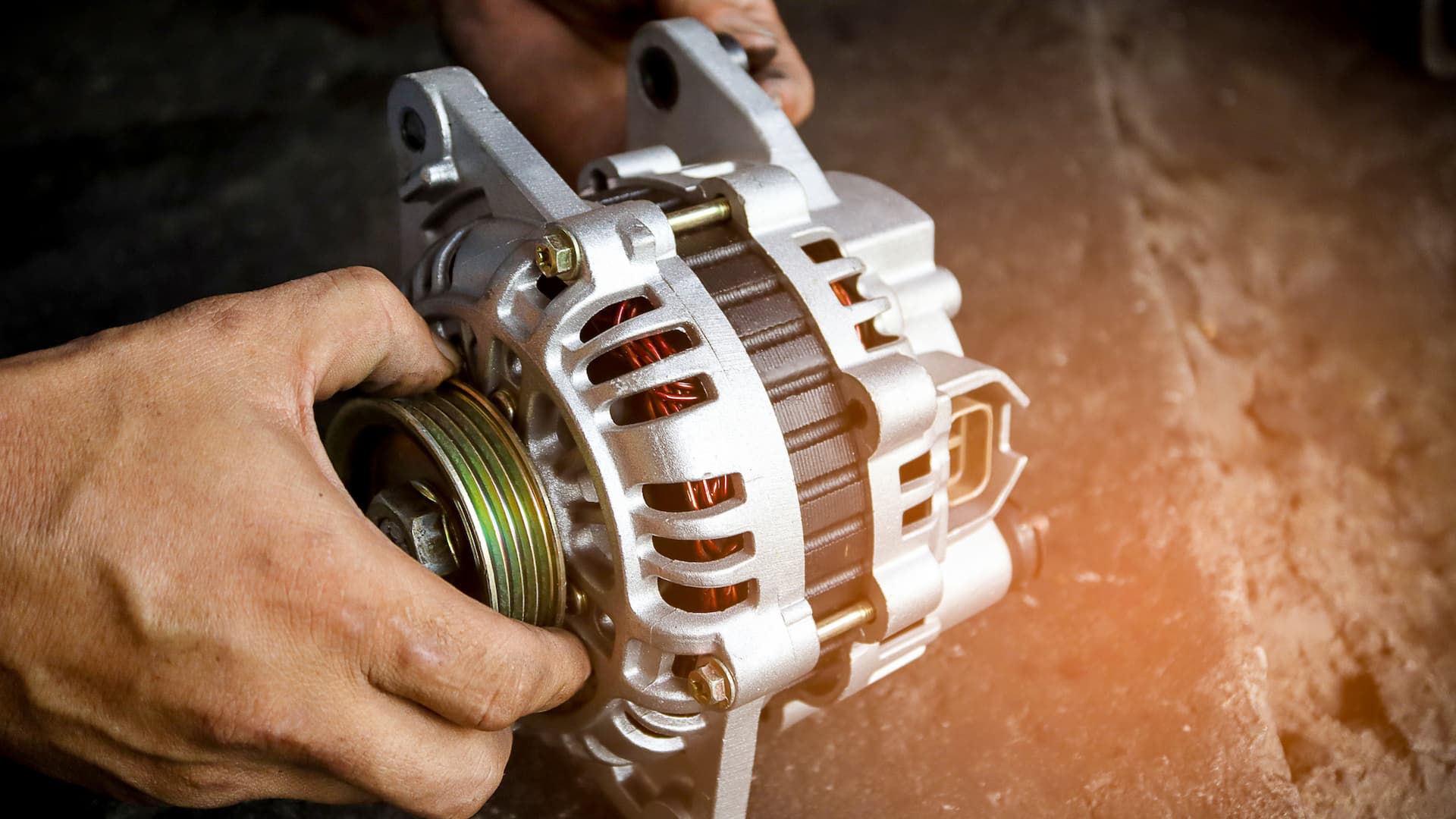 Car struggling to start? Before you blame the battery, you should consider that a faulty alternator could be to blame. If you’ve never heard of the word alternator it’s ok – this rarely mentioned part not only provides power for everything from the battery to the spark plugs, it is responsible for keeping your entire cars electrical system running smoothly. They rarely require replacing but when they do, you should know the signs and, more importantly, how much an alternator replacement will cost.

What Are Signs Of A Bad Alternator?

As alternators are belt-driven, a worn or snapped belt will cause it to stop working. When this happens problems with the car’s electrical system will be present with another sign such as loss of power steering or engine overheating as the belt that drives the alternator is usually the same belt driving the power steering system and radiator fan.

Other common signs of a bad alternator are the low battery warning light on the dashboard becoming illuminated, as well as dimmed or pulsing interior and exterior lights. The alternator is responsible for powering these and any signs of flickering lights are a sure sign that something is wrong with the vehicle’s electrical system.

How Do You Test An Alternator?

If the car is running, switch it off. For an accurate reading, the car should not have been driven recently and testing first thing in the morning will give you the best results. Make sure the battery terminals are clean and clean with a wire brush if needed. Switch the multimeter to the 20 DC volts (DCV) setting. Attach or contact the black probe of the multimeter to the negative battery terminal and the red probe to the positive terminal. This will give you a resting voltage for your car battery which should be around 12.6V. A lower reading than this can indicate something is draining the battery.

Can You Fix A Bad Alternator?

Despite their frequent use, alternators are usually relatively trouble-free, and when a problem occurs, it’s recommended to replace the alternator rather than repair it. The logic behind this is because a repair or rebuild can cost almost as much as a replacement alternator. The other consideration is because a new alternator will last longer than a refurbished one, and it usually comes with a warranty.

That said, there are some circumstances where repairing an alternator may make sense. If the belt is showing signs of wear or breaks, an alternator belt (sometimes called a serpentine belt) can be sourced and replaced without having to replace the alternator itself.

Some alternator parts can be easily replaced such as bearings. These can fail due to inadequate lubrication or excessive wear. Wiring connections can become loose or even break, disrupting electrical output. In some cases, these may be able to be soldered back together and repaired. The diodes on the rear of the alternator can become damaged by excessive heat, causing a break in current output. They can even leak which causes the battery to drain.

Repairing an alternator is a job for an auto electrician as it requires a particular set of skills. Another option, if replacing your alternator is too costly, is to fit a refurbished or rebuilt one. Not all the internal parts will be new, but any parts that needed replacement will have been discarded and fitted with new ones. We generally don’t recommend this option as it’s impossible to know the quality of the workmanship but it is an option for those on a tight budget.

Can A Car Run With A Bad Alternator?

We never recommend driving a vehicle with a bad alternator. An alternator that is not functioning correctly won’t be able to recharge the battery sufficiently so if you are driving and the engine cuts out or stalls, the battery likely won’t be able to provide enough electricity to restart the engine, leaving you stranded. This is particularly dangerous if it occurs at an intersection or on a busy road.

However, we know that a car can run with a bad alternator, even though we don’t recommend driving it in this condition – only in extreme emergencies.

A fully charged car battery should have a resting voltage of around 12.6 Volts. As a car is driven, with the alternator unable to power the vehicle’s electrical system, the task is diverted to the battery to provide power, which will quite rapidly drain it. When the battery voltage reaches around 12.2 Volts the battery is considered 50% discharged and considered ‘flat’, or fully discharged as 12 Volts. A battery with a resting voltage this low will be unable to provide enough power to start an engine.

However, if all the accessories are switched off and the car is drawing as little power from the battery as possible, in theory, it should be able to run the battery down to nine or ten Volts before cutting out. This is only enough for around 30 minutes of driving, and only in an absolute best-case scenario (assuming the battery is fully charged before the car is driven).

As always, we must state that driving a car with a bad alternator is dangerous, and not recommended.

What Is The Cost Of Replacing An Alternator?

Parts and labor costs to replace an alternator depend entirely on what type of car you drive. Some alternators are easier to replace than others according to where the vehicle manufacturer has located them in the engine bay. Generally, the lower it sits, the more engine components need to be removed before it can be accessed. Replacing the alternator is a fairly straightforward procedure with only a belt and a handful of bolts that need to be de-tensioned/removed before it can be replaced. Most mechanics will have the job completed in an hour or two, including the initial testing and diagnosis.

The alternator itself can cost anywhere from $150 up to $800 on an imported vehicle. There are typically a couple of options with varying price points but the adage rings true with electrical parts for your vehicle – you get what you pay for. A good alternator should give you at least five years of trouble-free service.

If an alternator/serpentine belt needs to be replaced as well, you can expect to pay an additional $20 – $50. Although these are usually replaced at specific intervals according to your vehicle’s maintenance plan.

Easy Solution To Replacing An Alternator

Replacing an alternator isn’t difficult but you will need some specialized tools like a torque wrench and breaker bar, and depending on how your alternator is mounted, a belt tensioner tool could be required.

Another consideration is diagnosing the alternator needs to be replaced, and for that, you’ll need a multimeter. These are all good tools to have if you’re working on your own car regularly, but they can be expensive to buy just to replace an alternator.

An easy solution to replacing an alternator is to book an appointment online with one of our qualified technicians who will check the health of your battery and alternator before recommending the best course of action for you.

We can even visit your home or workplace at a convenient time, which means you don’t have to arrange to drop off or pick up your car and there’s no waiting around at a workshop for the mechanic to finish – it doesn’t get any easier than that!