Do You Have A Bad Alternator Or Battery? (14 Symptoms + FAQs) 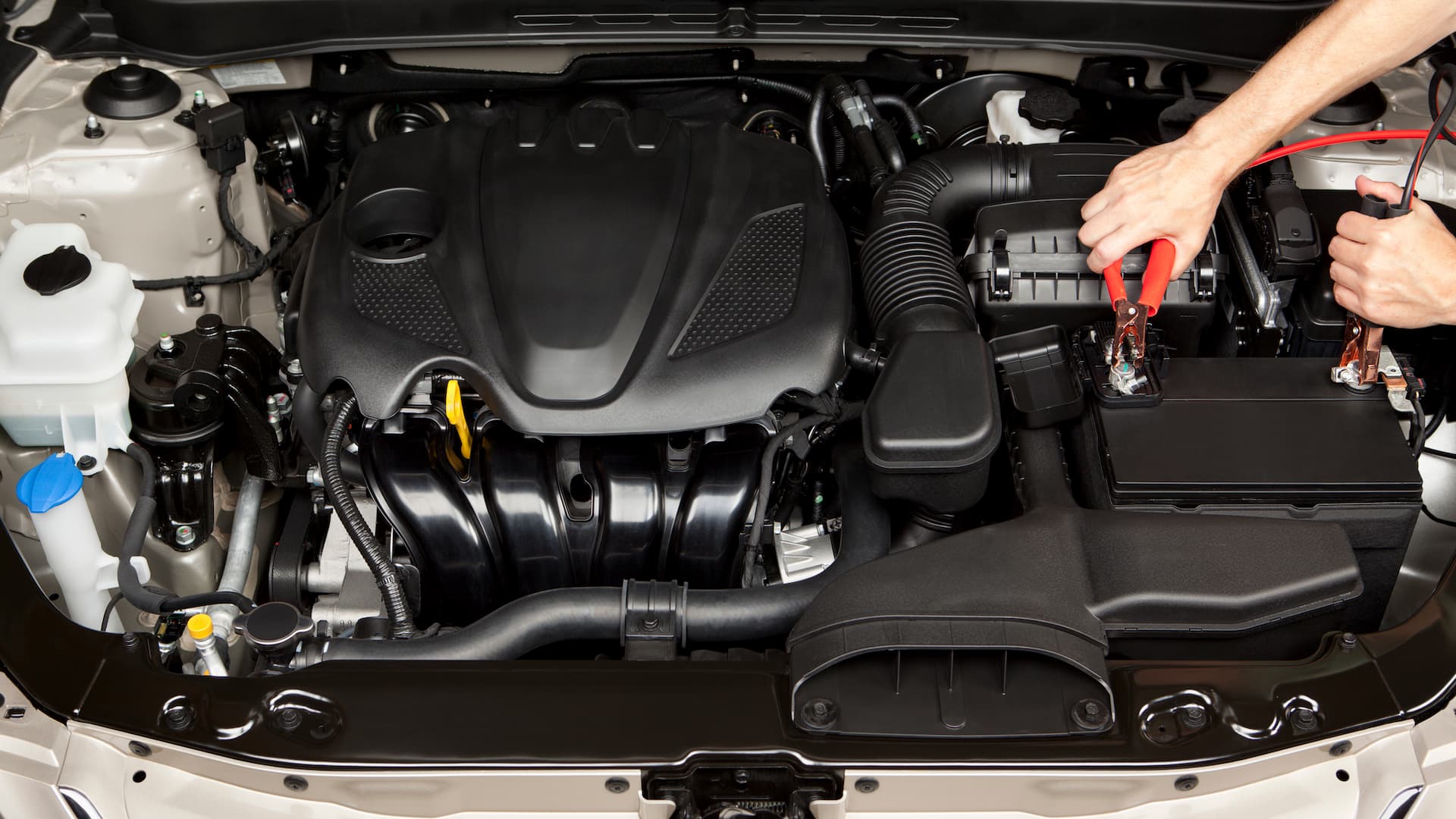 If your car engine won’t start or stalls frequently, you clearly have a problem.

However, is it an alternator or battery problem?

The battery delivers a high voltage to the starter motor, which then cranks the engine and fires the spark plug. Once the engine is running, the alternator takes over and recharges the battery — closing the cycle.

As you can see, either the alternator or battery could contribute to a startup failure.

So which one is it?

To figure this out, we’ll go through the symptoms of both a bad battery and a bad alternator. We’ve also included some FAQs to give you a better picture of these two starting and charging system components.

Let’s start with the problems a bad battery causes since it’s more likely to fail than the alternator.

If your engine won’t turn over, the initial blame usually falls on the car battery.

However, before you get your jumper cables, you need to verify if it’s the battery that’s actually causing the problem.

Here are signs to look out for:

When the engine is off, the vehicle’s battery powers all the electrical accessories.

Turn on the ignition and check your dashboard light symbols.

Do they light up?

This serves as a quick way to tell if the car battery is online before you crank the engine.

Switch on your headlights.

Are they dim or don’t turn on at all?

A weak battery will translate to dim dashboard lights or headlights.

A dead battery won’t light anything at all.

If your engine won’t turn over or takes far longer than usual, it’s time to grab the jumper cables and attempt a jump-start.

NOTE: Just remember that the negative battery cable doesn’t go to the dead battery negative terminal (this is a common mistake!). Clamp it to an unpainted metal surface on the dead car. Read more in our dead battery guide.

Extensive corrosion may require professional attention or even a battery change.

Check for corroded or loose battery cables too.

The conventional car battery will last about 3-5 years — the older the battery, the lesser its ability to hold a charge. Older, failing batteries also accumulate more corrosion from leaks, resulting in a lack of charging ability.

A leaking lead-acid battery will release sulfuric gases, emitting that odd, rotten egg smell. If your car battery is leaking, replace it as soon as possible.

Battery swelling often happens in extreme temperatures as internal liquids and parts expand. If your vehicle battery is bloated, warped, or distorted in any way — it needs replacing.

If you’re facing none of these six issues, then a bad alternator could be the culprit.

Tip: If it’s too tedious to troubleshoot, just call in the services of a mobile mechanic.

Let them figure it out while you go for a cup of coffee!

However, just to be safe, let’s go over the signs of a bad alternator too:

8 Signs Of A Faulty Alternator

If your battery seems fine, then startup issues could be from alternator failure.

Here’s how this potential troublemaker flags its problems:

A failing alternator will have trouble charging the battery.

In turn, the car battery won’t have enough power to start the vehicle.

If the engine stalls almost immediately after a jump-start, then your car’s alternator is the likely root cause. Frequent engine stalls while driving would point to an alternator problem too.

However, if your engine won’t crank, but the headlights work fine, it could be a bad starter motor lurking under your hood.

Your headlights might dim or brighten unevenly and perhaps even flicker. This could mean the vehicle’s alternator has trouble delivering consistent power.

One way to check is to rev the engine.

If your headlights brighten at a higher RPM, and then dim when you take your foot off the pedal, your car alternator definitely has issues.

If your interior lighting and dashboard lights dim gradually with the engine on, this indicates insufficient power from a failing alternator.

This can be a little confusing since this looks like it points to a battery issue.

However, a dead car battery can also be a symptom of vehicle startup issues – it isn’t always the cause.

Remember, a faulty alternator won’t charge up the vehicle’s battery, so you’ll end with a dead battery at your next crank attempt.

If your car alternator fails, it’s likely to disrupt any electrical system with inconsistent alternator output.

An electrical problem like strange sounds from your stereo, a slow-rolling power window, speedometers that go haywire, can all stem from a bad alternator.

Vehicle computers often have a priority list of where power goes, usually with safety in mind. So, with alternator failure, you may lose power to the stereo first before the headlights.

Growling or squealing from your vehicle is never a good sign.

If the squealing gets louder when the heater or sound system is on, you could very well have an ailing alternator. These sounds could also be from a misaligned alternator belt rubbing against the alternator pulley.

Another way to pinpoint a failing alternator is to turn on the AM radio to a low dial without music and rev the engine. A resulting whining or fuzzy sound could point to an alternator problem.

The alternator belt is under constant tension and friction. As it wears down, it can produce a burning smell because it’s near the hot engine.

An overworked alternator or one with damaged wires can also emit a burnt smell. Frayed wires create electrical resistance and will heat up as the alternator drives electricity through them.

8. The Dashboard Warning Lights Turn On

An illuminated battery light signals that something’s off with your charging system. On some cars, this could be indicated by the Check Engine light.

You might notice the dashboard light flickering on and off as different accessories are used. This happens because the alternator’s having trouble supplying power to changing loads.

What may appear as a simple dead battery problem could have a deeper underlying root cause. And since many of these battery and alternator symptoms overlap, it can be hard to pinpoint what’s actually causing the problem.

Is there a simpler way to deal with the alternator or battery question?

A Simple Solution To Alternator Or Battery Issues

The best way to get your alternator or battery troubles fixed is to let a professional take a thorough look. They’ll even help you sort out a new alternator or new battery (if that’s what you need) too!

Lucky for you, RepairSmith is super easy to get hold of.

RepairSmith is a convenient mobile vehicle maintenance and repair solution.

Here’s what they offer:

For a quick and accurate cost estimate of your starting and charging repairs, fill this online form.

Now that you have a better idea if it’s your car’s alternator or battery that’s creating engine troubles, let’s cover some FAQs.

7 FAQs On The Alternator And Battery

Here are a couple of questions (and their answers) on these charging system components:

1. How Urgent Is An Alternator Or Battery Replacement?

A bad battery won’t damage the alternator, but a bad alternator can damage a battery.

The car battery simply isn’t made to deliver electrical energy for extended periods, so both components need to be functioning optimally.

You may be able to repair the alternator instead of replacing it, and a rebuilt alternator might be a little more cost-effective. However, just like a new alternator, it’ll depend on the make and model of your car.

2. How Do I Check The Alternator Or Battery Output?

Use a voltmeter or multimeter, connecting the leads to the battery terminals.

With the engine off, a healthy battery voltage should fall around 12.6V.

Turn on the stereo, AC, and headlights.

Your vehicle may also have a gauge that measures volts or amps, which can also help you determine your alternator or battery output.

3. Can I Drive With A Bad Alternator?

Yes, though it’s not advisable.

Your car battery won’t receive proper charging, and your engine can stall anytime.

Consider hooking your battery to a battery charger between startups to ensure it has enough power to crank your engine if you haven’t had the faulty alternator fixed.

4. Can I Disconnect The Battery While My Car Is Running?

This is not advisable.

Detaching a battery cable while the engine is running in modern cars can create a millisecond voltage spike, damaging sensitive electronic circuitry.

5. Can A Vehicle Alternator Charge A Battery Bank?

There are several different setups you can use to charge your house battery bank from the alternator.

The simplest method uses a parallel connection from the alternator to the starter battery and house battery. Others may employ an external voltage regulator and a charge controller.

6. How Does A Car Alternator Work?

An alternator pulley is connected to the engine and drives the alternator belt.

The belt spins the rotor, creating a magnetic field that the stator uses to generate voltage.

The diode converts the voltage from alternating current (AC) to direct current (DC) for the battery, and the voltage regulator regulates this electricity output.

7. What Are The Signs Of A Faulty Starter Motor?

The starter motor draws power from the car battery, using it to turn over the vehicle engine.

Here are some signs of failing starter:

So if you have alternator or battery issues, get them resolved quickly to avoid any further troubles down the line.

Fortunately, you have RepairSmith. Just contact them, and their ASE-certified mechanics will be at your doorstep, ready to help you out!

#Battery
Share this story:
RepairSmith RepairSmith is the easiest way to repair your car. Our ASE-certified technicians deliver quality car repair and maintenance directly to your driveway. We offer upfront pricing, online booking, and a 12-month, 12,000-mile warranty.