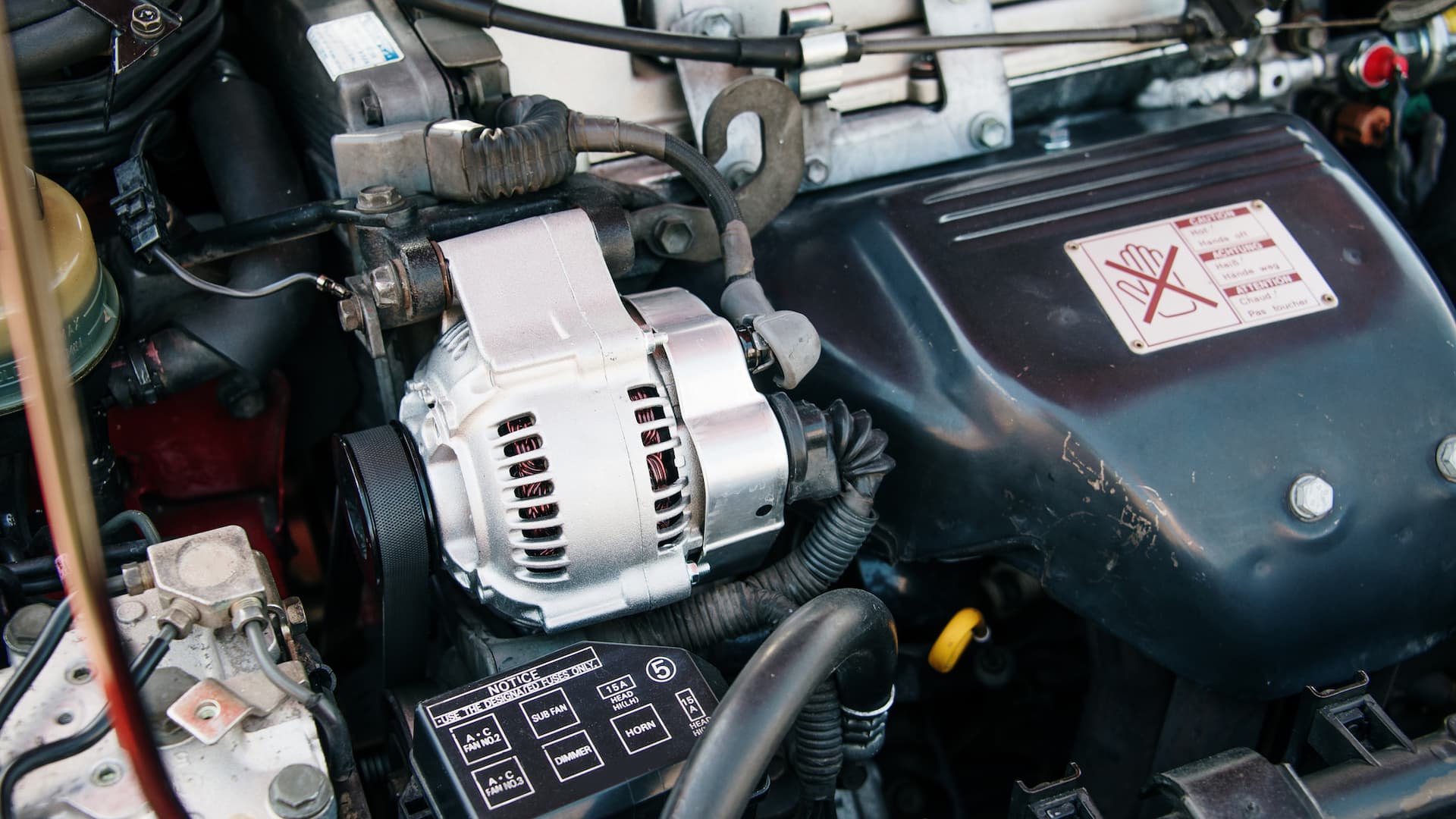 In this article, we will be discussing what the alternator is and how it functions in your car.

What are the differences between the battery and alternator?

Finally, we will discuss symptoms of a bad alternator, and if you are having any trouble with your alternator, we will also provide you an easy solution to replacing it!

What Is An Alternator And What Does It Do?

You probably know that when a car battery is flat your car won’t start, but when it comes to running your vehicle’s electrical system, the alternator is the real star of the show. If it wasn’t for your vehicle’s alternator you wouldn’t be able to use your windshield wipers when it rains, switch on your lights when it’s dark, or sing along to your favorite tunes on a road trip.

What Is An Alternator And What Does It Do?

The alternator can be found in a car’s engine bay and is connected to the motor via a belt and pulley. When the engine is running it rotates the main shaft that runs through the inside of the alternator, generating AC, or alternating current electricity – the same type of electricity found in your home. This is important and we’ll come back to it later.

So what does an alternator do? There are two primary functions that the alternator in your car performs. The first is to recharge your vehicle’s battery which in turn powers the starter motor, allowing the vehicle to start. In fact, if you’re having trouble with a car battery that doesn’t hold a charge, more often than not it’s because of a faulty alternator. The other function an alternator performs is to provide electricity to a vehicle’s electrical system – lights, entertainment system, windshield, power seats, and windows.

It’s worth pointing out that hybrid vehicles still use an alternator, although they often use other forms of generating electricity in conjunction with the alternator, such as regenerative braking. Most electric vehicles do not have the need for an alternator with electric motors and batteries providing enough electricity.

Keep in mind that the battery in your car does not actually store electricity, it stores chemical energy (this is an important distinction).

When a car engine is switched off, the battery provides power to electrical components (remember the alternator only works when the motor is running). Over time, this will drain the battery causing the problem of what we call a flat battery. When this occurs, your car will not be able to start. This is because the battery provides the huge amount of current needed to start the starter motor which turns the flywheel, starting the engine.

The alternator also powers the car’s electrical devices while the engine is running.

What Are The Main Components Of An Alternator?

There are several designs of alternators, but they share similar componentry.

The alternator is quite small, about the size of a coconut. The outer housing is constructed of lightweight aluminum to prevent magnetization and has several vents to allow air to pass through and dissipate heat.

Inside the alternator, we find a shaft that runs through its entire length. At one end of the shaft is a pulley. The pulley provides grip for the drive belt, while rotational force is being applied from the engine via its crankshaft to the alternator.

Inside the outer housing, we find the internal components, including an internal regulator and rectifier.

The regulator is made up of several smaller components to distribute the electricity created by the alternator and regulates power to the vehicle’s battery. As an alternator generates alternating current (AC) and your vehicle’s electrical system runs off direct current (DC), the rectifier is tasked with converting the AC into DC electricity.

You will also see various sets of copper wires in a star configuration that are connected to form a neutral point. Each coil of wires produces a single phase of AC electricity.

What Are Symptoms Of A Bad Alternator?

When an alternator is faulty or on its way out, it can display signs similar to that of a dying battery so in this section we’ll outline how to identify symptoms of a bad alternator and how to diagnose a problem with your car’s electrical system.

Your vehicle’s lights are usually the first sign that your alternator has started to struggle. This can show itself by a warning light on the dashboard that looks like a battery. Because of that, most people will assume that it’s related to a battery problem but the light is linked to the voltage output of the alternator. If the voltage output is out of acceptable range (between 13 – 14.5 volts) the light will illuminate, but once it falls back into range the light will go off. Therefore, even if the warning light is not constantly displayed, it’s still a reliable sign that your alternator is playing up and needs some attention.

The warning light may come on in conjunction with another lighting issue caused by a bad alternator – dim or flicking headlights and/or internal lights. With the alternator powering your vehicle’s electrical system when the voltage supply starts to fluctuate lights and instrumentation can become dim, flicker on and off, or momentarily stop working altogether. This is caused by the alternator being unable to provide the voltage needed to keep lights and instruments working at full strength.

An obvious sign that is often confused with a dead battery is the failure for a vehicle to start. This may be accompanied by a clicking sound that indicates that the relays are ticking over and the problem may indeed be a dead battery but it’s caused by the alternator being unable to provide the voltage necessary to recharge it. The way to tell the difference between a battery or alternator problem if your vehicle is refusing to start is to jump-start the vehicle then remove the jumper cables as soon as it’s running. If the car dies again the problem is that the alternator. If it continues to run, your problem lies with the battery.

Accessories that are playing up are another indication that your alternator could require replacing. Power windows can be slow to wind up or down, the entertainment system might refuse to work, or your electric seats may take forever to adjust. With a bad or failing alternator, several of these issues will be present simultaneously

Easy Solution To Replacing An Alternator

Replacing a car alternator isn’t a difficult job but it can be time-consuming. The toughest part about replacing an alternator is manipulating the alternator belt’s tensioner pulley enough to remove the alternator belt. Recommended replacement time to fit a new alternator for a qualified mechanic is around one hour. There is also the issue of pinpointing that the problem is a faulty alternator or a dead car battery as many of the signs overlap.

If something’s wrong with your alternator, your easiest solution is to contact a mechanic to give it a look over. In this case, your best bet is a mobile mechanic who can come by, instead of attempting a jump-start.

RepairSmith is a convenient mobile vehicle maintenance and repair solution. Here’s what they offer:

Fill out this online form for an accurate cost estimate for an alternator replacement and repairs.