A Guide To The AGM Battery (Pros + Cons, FAQs) 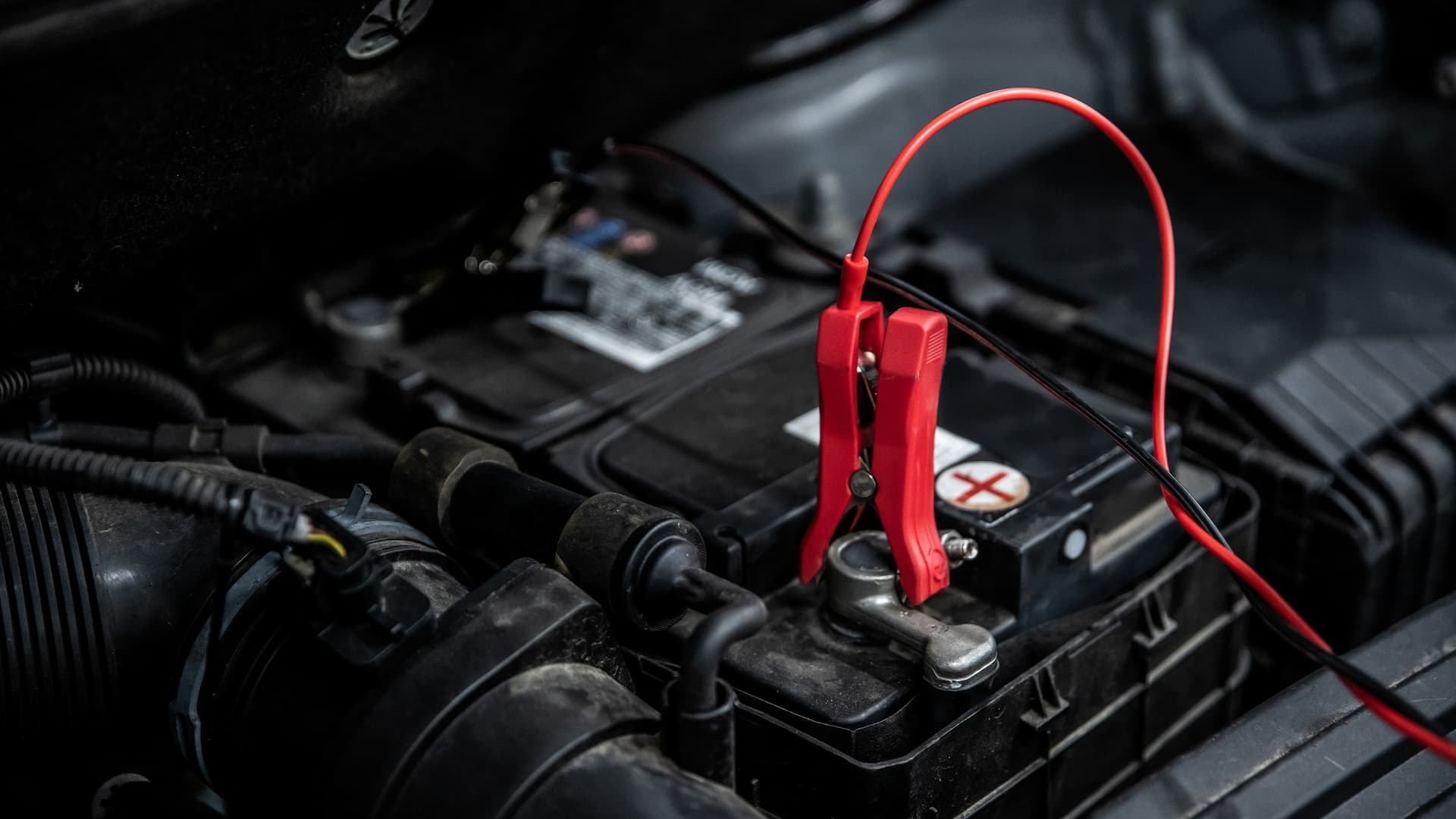 The AGM battery found its early uses in military aircraft but has since made its way into many other applications, including modern start-stop vehicles.

But what makes the AGM battery different?
What are its benefits and drawbacks?

In this article, we’ll answer all those questions, add in some FAQs, and drop an easy solution to any AGM battery issues you may be facing.

The AGM battery is a type of sealed lead acid battery (also known as a Valve Regulated Lead Acid or VRLA battery).

AGM is short for Absorbent Glass Mat, which refers to the battery technology used.

Developed in the early 80s, absorbed glass mat batteries were designed as an alternative to NiCad (NiCd) batteries which were very costly.

Today, you’ll find this deep cycle AGM battery in all manner of applications — from marine to aviation and even off-grid power systems like wind and solar. An absorbed glass mat battery is also well-suited to advanced cars with start-stop technology and significant power demands.

Owing to these inherent benefits and uses of AGM batteries, the AGM battery market value is set to grow by almost $18 billion from 2022 to 2032, at a 4.8% CAGR.

Let’s now go through the inner workings of the absorbed glass mat battery.

How Do AGM Batteries Work?

The secret to an AGM battery’s enhanced performance lies in an ultra-thin glass mat, sometimes called an AGM separator.

The fiberglass mats in AGM sealed batteries are sandwiched between a lead plate on each side, soaking up the electrolyte. It absorbs and holds the battery acid. This way, the electrolyte is suspended in a “dry” state instead of the free-flowing form found in a traditional flooded battery.

The glass mat maximizes the surface area for the electrolyte to react with the battery plates. This allows a fast reaction between the battery acid and plate material.

Remember that this is a VRLA (Valve Regulated Lead Acid) battery.

What does the “valve” do?
The AGM battery electrolyte is typically a mix of sulfuric acid and water. While charging, the chemical reaction produces hydrogen and oxygen. The battery valve stops the gases from leaving, preventing water loss. These gases are reabsorbed into the electrolyte.

However, the valve vents the gases when there’s too much pressure (like when the battery is overcharged.) This helps equalize pressure and prevents structural damage to the battery.

Next, let’s see how AGM technology influences the battery’s features.

What Are The Pros And Cons Of AGM Batteries?

AGM technology batteries feature a host of benefits. But they’re not perfect and have their downsides too.

Let’s look at the advantages first.

An AGM battery has a longer lifespan than a conventional battery — lasting up to 2x longer. These batteries also have a very low self-discharge rate, so they last longer when not in active use.

AGM batteries have the power to start a car engine more than 60,000 times. That’s about 3x more than what traditional batteries can do.

The glass mat in AGM batteries isn’t completely saturated with electrolyte, and the liquid doesn’t expand the way they do in a flooded lead acid battery.

And while you likely won’t get any power from a frozen battery, it won’t crack or damage the plates either.

The AGM battery has a very low internal resistance, allowing it to deliver power quickly. This is an essential function of a car battery, which pushes rapid bursts of power to start the engine.

AGM batteries have excellent charge acceptance, which can extend their cycle life. The AGM battery can charge up to 5x faster compared to traditional batteries.

The electrolyte soaked glass mats in between each lead plate act like a damper. As the plates are packed fairly tightly, movement and vibrations are reduced to almost zero. This creates a battery that’s highly resistant to vibration and shock.

The AGM battery is maintenance-free and doesn’t require any watering service. The absorbent glass mat between the plates holds the electrolyte in place, keeping it from spilling even when the battery is in odd positions. This allows for greater mounting flexibility.

Additionally, because the AGM battery is spill-proof, regulations are generally more relaxed about transporting them by air or road.

Now that we’ve looked at the advantages, let’s go over the drawbacks.

The AGM battery has a lower tolerance to overcharging and high voltages when compared to flooded batteries.

Now that you know what AGM batteries are, including their pros and cons, let’s go over some FAQs.

Here are some answers to commonly-asked AGM battery questions:

1. Are AGM And Gel Batteries The Same?

The AGM and gel battery are often mistaken to be the same because they’re both “dry cell” lead acid batteries.

And while the gel cell is a VRLA battery too, it holds its electrolyte solution very differently.
Where the AGM battery uses an absorbent glass mat, the gel cell battery uses a chemical agent (like silica) to suspend the electrolyte in a gel form. The gel restricts movement, so the battery becomes spill-proof.

Gel batteries don’t do as well as the AGM as a starter battery, so you’re less likely to find them performing that function in cars.

AGM technology is used in both deep cycle and starter battery applications.

3. What Are Flooded And Sealed Lead Acid Batteries?

In a flooded lead acid battery (FLA), the lead plates are suspended in a free-flowing liquid electrolyte. It’s a wet cell battery, meaning the battery can spill and requires regular electrolyte maintenance.

The sealed lead acid battery (SLA battery) applies similar chemistry. But unlike traditional batteries, the electrolyte in an SLA battery is suspended in a gel form (for gel cell batteries) or held by a glass mat (for AGM batteries).

4. How Is A Lithium Battery Different From AGM?

AGM and lithium batteries have their own benefits and drawbacks. The lithium ion battery is much lighter, has a better cycle life, and can charge faster than the AGM battery.

Lithium ion batteries also have a flat discharge curve (meaning if you power a torchlight with a lithium battery, the bulb won’t dim as battery power runs out, it’ll just go off).

However, AGM batteries are cheaper to produce, have a higher Cold Cranking Amps (CCA) rating, and are resistant to vibration.

It’s important to know that you can’t just swap the AGM starter battery in your car with a lithium ion battery, as your charging system probably isn’t set up to charge a lithium battery.

Tip: Always consult a mechanic on what battery type to use if you’re unsure.

5. Can I Charge An AGM Battery With A Regular Battery Charger?

AGM batteries are sensitive to overcharging, so a regulated battery charger or battery maintainer is one of the key AGM battery accessories you should use.

The right AGM battery maintainer typically has microprocessors that adjust the current and voltage delivered to the battery to avoid overcharging.

An AGM battery can be used as a solar battery. You can use a solar panel to charge one, and they’re well-suited for applications with low energy demands.

However, keep in mind that:

7. What Is A Start-Stop Vehicle?

Start-stop vehicle technology automatically turns off the engine when the car stops (like at traffic lights or in stop-and-go traffic).

While the engine is temporarily off, the car battery is the sole source of power to all the vehicle’s electrical devices, from stereo to GPS navigation. When the clutch is depressed, or the brake pedal is released, it restarts the vehicle quickly and quietly.

AGM batteries are suited to such start-stop applications.

8. What Is Battery Internal Resistance?

Any current that doesn’t go into the charging translates into heat, which is why batteries get warm during heavy charging. In extreme cases, a thermal runaway can occur.

It’s when too much heat is generated in a battery that can’t be expelled accordingly. If this situation continues, temperatures will increase until the battery cells dry out and the container softens and melts.

Destruction from a thermal runaway can release toxic chemicals, and cause electrical fires or batteries to explode.

If something’s wrong with your AGM battery, your easiest solution is to contact a mechanic to review it. In this case, your best bet is a mobile mechanic who can drop by, instead of attempting a jump-start.

RepairSmith is a convenient mobile vehicle maintenance and repair solution. Here’s what we offer:

Fill this online form for an accurate cost estimate of your battery replacement and fixes.

As vehicles evolved and developed greater power demands, battery technology had to evolve to meet these power needs. And when it comes to meeting advanced power needs, the AGM battery is currently the best one among all lead acid options.

If you are facing any issues with your existing battery or have any other car battery concerns, you can always look to RepairSmith for help. Just contact us, and our expert technicians will be in your driveway to lend a hand!

#Battery
Share this story:
RepairSmith RepairSmith is on a mission to deliver convenient auto repair everywhere. We make it easy for everyone to keep their vehicles reliable, by delivering quality auto repair and maintenance directly to your home or workplace, with effortless booking, transparent pricing, and trusted technicians.